In this evolution of a design classic, the traditional leather-top pedestal desk gets stripped down to its barely there essentials in Coffinier Ku’s sleek Lucite version

Before desks, and the auspicious arrival of the printing press in 1440, the few Europeans who had use for a pen made do with writing boxes. Portable wood contraptions, with flat or slanted tops, they opened to hold implements and documents. As literacy became less peculiar, merchants and military sorts joined scribes and clergymen as owners of such cases, which acted as mobile offices that were used on any surface, from smooth tabletops to bumpy laps. By the 17th century, the boxes warranted dedicated stands that eventually evolved into permanent legs. “Aristocrats needed a place to spread out their map collections and architectural drawings,” said furniture curator Joshua Lane, of the Winterthur Museum, in Delaware. The addition of drawers for stashing accouterments gave rise to the bureau desk, and the introduction of the kneehole carved the way for the pedestal desk (see a variation, above), in which stacked drawers double as supports and a leather inset protects the top. As production simplified, living space increased and the ability to write no longer wowed anyone, desks became common household items. 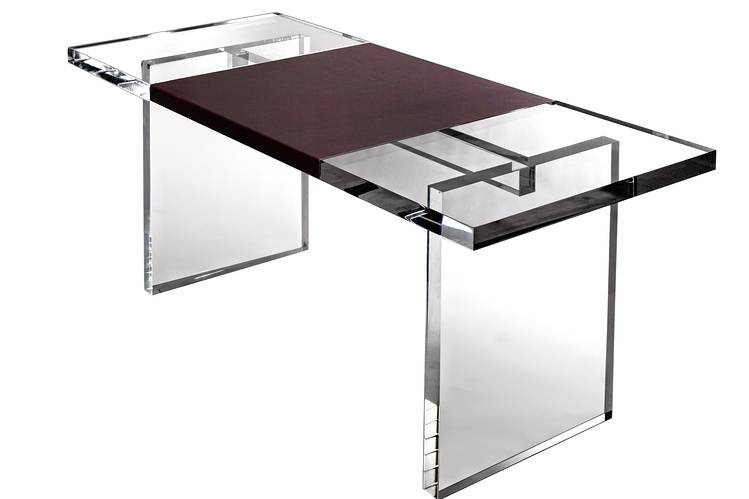 In the digital era, we require little more of a desk than a level top and a nearby power source, though some of us find a lack of storage challenging. Coffinier Ku’s sleek Lucite leather wrap desk is “aspirational,” said Ed Ku, who shares design duties with partner Ettienne Coffiner. “It forces you to be a bit neater than you might normally be.” First dreamed up as a way to avoid blocking a picture window in a client’s Southampton, N.Y., home, the 6-by-3-foot piece distills the pedestal desk to its basic form but retains one embellishment: The leather, customized to match any aesthetic, is set into the center section and “gives you a softness,” Mr. Ku said. An ideal surface for perusing one’s map collections and architectural drawings—on a laptop.”